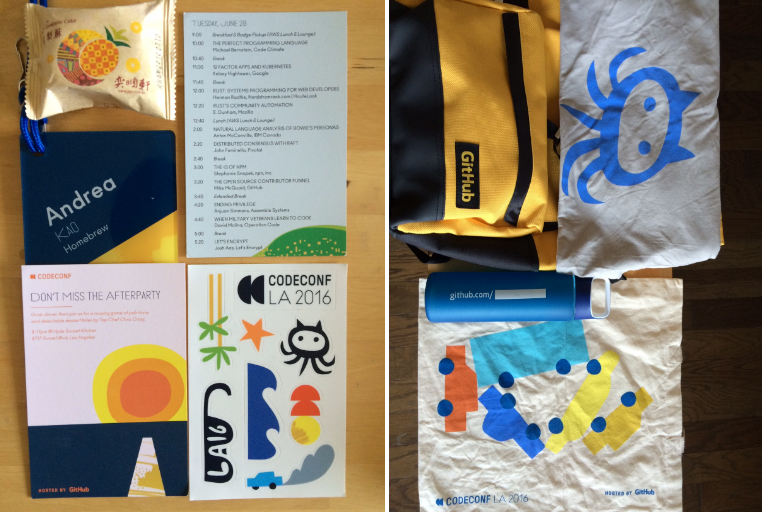 CodeConf happened! On the Monday preceding the conference itself, I attended the Dissecting Git’s Guts workshop and a dinner for interns and students. Bridging the age gap with the rest of the students wasn’t as bad as I’d feared. It was great to attend the conference with my friend Sarah (who just had a baby!), to meet my mentor Mike in person, to meet new friends, and to be amongst a mix of familiar and unfamiliar, local and non-local attendees. So many people not only knew of Homebrew but were also enthusiastic users – which is perhaps to be expected at a conference for the open-source community, but it was still exciting. I drank too much at the after-party.

A lot of people documented the conference on social media and at least one person shared his notes of nearly every workshop and talk. I’m looking forward to revisiting the presentations when the videos are eventually posted online. So many talks went over my head, but they all seemed to be built atop the themes of inclusion, the desire to help one another, and the desire to bring joy to one another. Though I was in awe of what other conference attendees have accomplished (e.g., this awesome app), I doubt that anyone at the conference was ever made to feel that they didn’t belong there.

Rails Girls Summer of Code has begun, and with it, my stint as a volunteer supervisor. I’ll be living vicariously through the team that I’m “supervising” for the Rails Girls organization. In the same period of time, bike sharing has come to downtown LA. While it’s a nice option, I’m not sure if it’s something I’ll rely on to get across downtown. My friend Tiffany has generously offered to let me work at her shared studio at the edge of the Arts District while she lives and works remotely in Hong Kong. The problem is not only the fear of getting mowed down by motorists, but also the fact that the most direct route traverses Skid Row. So far I’ve made a handful of trips through Skid Row by bike and bus. It’s bleak.

The middle of last week marked the approximate halfway point of the Outreachy summer program, and in a little while we’ll have reached the point where two-thirds of the weeks have already passed. For the time that I have left, I’ll be making a concerted effort to work outside the house, and to return to the same level of exercise I’d enjoyed before the program started. Hopefully I’ll soon regain the momentum and confidence I seem to have lost in the past few weeks (thanks, depression!). Per Mike’s suggestion, I hammered away at a number of brew audit bugs and it did make me feel better.

My next post or two will focus more tightly on Homebrew… I need to catch up on the 7 test-related pull requests that have been submitted and merged (but not yet documented on this blog)! I’d also like to write about some general aspects of my work and learning, not just about the specific changes I’ve submitted so far.